I like solar power. I’ve purchased over a dozen consumer solar panels from Brunton to PowerMonkey to Goal Zero in a search of a favorite. Goal Zero’s older Nomad7 (purchased at a nice discount from TheClymb) is the newest leader.

But this isn’t a review of the Goal Zero; others have written excellent solar panel reviews, notably The Wirecutter and OutdoorGearLab. What I want to know is how to get the best performance, how to use it most effectively, to characterize it. What conditions produce best charge? What charge is produced under average conditions?

Goal Zero’s Nomad7 uses Mono-Crystalline panel technology – the most efficient technology on the consumer market, up to 22%. They are reliable, have a very long life span of up to 30 years, generate the highest wattage per square foot and perform the best in high temperatures.

The problem with crystalline panels is that they work best with direct, strong sunlight. In dispersed or ambient light the performance drop-off is severe – a slightly overcast day or shadowing, even of 10% of the panel, will drop their output to 20% of normal. My awesome time in Death Valley notwithstanding, direct, bright sunlight, like dry clothes or cold beer, is a luxury I’m often missing. So exactly how much efficiency is lost, and how cloudy can the day be?

has a few better specifications and improved design.

The Goal Zero Nomad7 was placed in a south-facing window at an orientation with excellent sun exposure from dawn to dusk. Using the panel behind glass undoubtedly reduces the power generation but is a common setup for me whether indoors, sitting on the dash of my truck, or in a hostel, so I feel it is a valid test. Using a prototype model of Petiole Lab’s SproutCore I created a simple experiment to record light intensity and voltage. I hooked up the Nomad7’s USB output to the SproutCore’s voltmeter while the SproutCore’s LDR sensor (light dependent resistor, also known as a photo-resistor) measured light intensity throughout the day. Another caveat: I am recording the USB which is capped at 5V out. The raw output will produce up to 9V but can’t be used to charge USB devices so I chose to measure USB.

The Goal Zero Nomad7 was placed in a south-facing window at an orientation with excellent sun exposure from dawn to dusk. 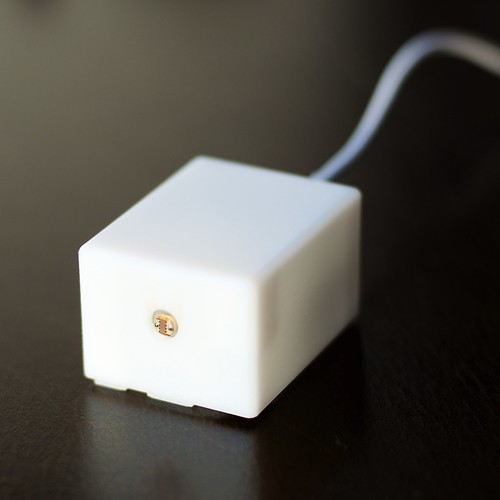 The LDR doesn’t output a quantitative LUX reading but is good enough to give a rough indication of light intensity. A measured light intensity of 25% is roughly equivalent to dawn or dusk light: Enough that you wouldn’t need a flashlight to get your gear together but you might need a tripod or wide aperture for sharp photos. An overcast but bright day might get you 50% to 75% light intensity, and a sunny day will be 80% to 95%.

Unfortunately, the panel doesn’t output a full 5V charge without very full light, at around 90% measured light intensity. On this day those conditions only existed for 2.3 hours. Devices such as an iPhone will only charge when fed a clean and constant 5V. Goal Zero is very upfront about this: “If clouds pass by or weather changes, the charging can become interrupted. Phones will often reject the charge in cases like these.” The problem goes deeper because, with the picky iPhone in particular, once a ‘weird’ voltage is detected the device may reject all power, even good 5.0V power, until it is unplugged and plugged in again. So if a cloud passes or a person stands over the panel and the output momentarily drops below 5V, your iPhone will stop charging until you attend to it. This is a very good reason to use a purpose-designed solar battery pack – such as Goal Zero’s Switch 8

– to collect charge before plugging in your device.

Goal Zero also states that “Goal Zero Rechargers/Power Pack charge well with solar regardless of the conditions – they never reject a charge opportunity.” If the Goal Zero batteries like the Switch8 can charge at 4v, which only requires about 85% light intensity, then almost 5 hours of charge time was provided. The difference between 90% and 85% light intensity sounds small but is about the equivalent of a thin cloud passing in front of the sun or standing in a plane’s shadow.

When light intensity drops below 80% the voltage drops to 1 – 1.5V, probably not enough power to charge anything. I would like to know what the minimum charge voltage for the Switch8 is, but I’d bet that it is above 1.5V. It is likely to be around 3.7V unless they have clever energy harvesting circuitry.

The analysis above is for a good, sunny day. A couple days later, on January 18, the day was overcast and I got nearly zero charge out of the panel. It wasn’t cloudy or rainy, just hazy. This was disappointing but is simply a characteristic of Mono-Crystalline panels technology. This result clearly illustrates that bringing this panel on a camping trip in the Pacific northwest may be pointless and relying on it is ill-advised.

On January 15 and 17, results were fairly similar to sunny January 16. Passing clouds and light haze cause charging to momentarily cease but overall times of active power generation and average light intensities are very similar. The data can be seen below:

Broadly estimating based on the charts above, a nice (winter) day will only provide about 2 hours of “direct sunlight” and indirect but useful light for another 3 hours. Let’s say my panel nets me 2W (4v at 0.5A) on average and is active (generating greater than 4v) for 5 hours of the day. Will my phone charge? Yes.

My iPhone 5 battery has a nominal capacity of 5.45 Wh (1,440 mAh at 3.8V). Charging introduces many inefficiencies so using a Watts Up? Pro Electrical Meter

, oPower analyzed actual charging to determine that the iPhone 5 consumes 9.5 watt-hours when charged from a wallwort. The inefficiencies of first charging a battery then charging a cell phone from that battery are probably worse but I can’t measure those at this time so I’ll just round to 10W.

Does this match Goal Zero’s advertisements? Yes. They claim a Nomad7 will charge a Switch 8

(8Wh, 2200mAh) in 4 – 8 hours. If we assume similar inefficiencies, we’ll need 12.6Wh to charge the 8Wh Switch8, which under the conditions above will take about 6 hours of solid sunlight. That sounds like 4–8 hours. I’m impressed with Goal Zero’s marketing: these numbers appear to hint that Goal Zero would like their products to work as advertised or better rather than drive sales by pushing lab specifications that won’t occur in real usage.

What does all this boil down to? The manufacturer specifications are correct: the panel requires full, bright sun exposure and the use of a battery to collect charge before charging your devices. I shouldn’t hope to get much charge in cloudy, hazy weather or under partial shadow. If I’m headed to the California Redwoods, the Pacific Northwest and the Appalachians in winter I’ll probably stick with a large battery. Death Valley, Zion, or Red Rock Gorge? The Nomad7 should provide sustainable power for as long as I need to camp.

I guess I need to go buy a Switch 8

,or maybe the new Switch10.

I also have a few more experiments I’d like to run. I want to try the same setup in the summertime with more light and more intensity. I’d also like to measure the amperage produced in addition to the voltage so I don’t have to guess at total power generated (although this is an informed guess based on typical IV curves of solar panels). This will have to wait for a new current measurement sensor to be added to the SproutCore.

Finally I want to compare Crystalline Solar Panel to PowerFilm – PowerFilm panels are less efficient but theoretically work better in partial light conditions. An initial informal test confirms this: in overcast weather the Nomad7 produced zero charge while the PowerFilm generated between 2 and 5V, tracking light conditions closely without the 80% drop-off the mono crystal panels exhibit. Hopefully I can run this experiment in a few weeks.

If you use a smartphone in the backcountry make it an iPhone and make it a small one. As seen in the table to the right, iPhones require about half the power of comparable phones for a similar functional life. A small iPhone will charge with fewer hours of sunlight when compared to any similar Android phone and an external battery pack will hold twice the number of charges. (I’ve seen “Power Saving” and “Ultra Power Saving” modes in Android phones but these don’t allow use of the camera or GPS, which are the reasons I bring a smartphone into the backcountry). Bottom line, if you assume you can rely on about 8 – 12Wh of charge per day then any phone with a battery capacity over 8Wh will slowly discharge over your trip. You may require a larger panel, additional panels or may have to leave your phone off more often.

Final tip: If you are using an iPhone, turn on Airplane mode before plugging into your external battery pack or solar panel. It will charge significantly faster and more efficiently – inactivating the GPS circuits, the cellular, bluetooth or WiFi antennas while simultaneously charging appears to allow more energy to go directly into the battery. The proof of this method will come in a later post. This may also work with Android phones, I have not tried it.